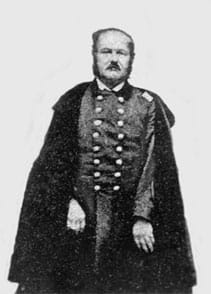 Shows him in his Union Army officer's uniform with a civilian cape.
Wisconsin Historical Society, Iconography, ID 90635
Suggest Changes to this Record

The family left for America in 1842. It was said that St. Sure had committed some financially-related crimes, possibly stealing from other nobles while serving at the court of the king. They first settled in Syracuse, Onondaga County, NY, where William was born, before settling in Sheboygan, Sheboygan County, WI. He and his wife had marital troubles and a difficult time adjusting to their new life in America. According to one account:

“The St. Sure family, who had been accustomed to much luxury in their native land, lived in most distressing circumstances for a time. St. Sure tried to break up a stony piece of land but failed completely, and in the early fifties sold the place and moved to Chicago.”

St. Sure went to Chicago, while his wife returned to Sweden with their four daughters and some friends. While in Chicago, St. Sure attended Rush Medical College, where he graduated in 1852. Elisabeth and the children returned to the U.S. in 1858. The family was living together back in Sheboygan in 1860. On March 1, 1863, Elisabeth filed a petition for divorce on the grounds that Adolph had absconded and had previously been sentenced as an adulterer on December 11, 1844.

St. Sure was commissioned as a surgeon of the 15th WI by the Governor of WI on November 27, 1863, with his rank to take effect the same day. Surgeon Lindfelt’s residence was recorded as Sheboygan, Sheboygan County, WI. This was not his first appointment as a medical officer in the Union Army. He had previously been commissioned as the 2nd Assistant Surgeon of the 12th WI Volunteer Infantry by the Governor of WI on September 30, 1862, with rank from September 28, 1862. Lindsfelt had been mustered into Federal service as 2nd Assistant Surgeon at Louisville, KY, on November 18, 1862, to rank from September 30, 1862. He held that commission until March 23, 1863, when the following curious statement was entered into his service record:

“Mustered out of U.S. service from date of muster in, he having been irregularly commissioned and mustered there being no place provided by law for him.”

To correct this, the state of WI retroactively transferred him from the 12th WI to the 8th WI Light Artillery Battery. This was accomplished by Special State Order # 70, which appears to have been backdated to June 4, 1862, to take effect on May 26, 1862. At some point between March and June 1863, Lindsfelt served on “detached service as Surgeon in charge” of an Army Hospital at Bardstown, Nelson County, KY.

On June 6, 1863, Surgeon Lindsfelt reported for duty with the 8th Battery, which was assigned to the brigade of Colonel Ole C. Johnson, who commanded the 15th, and others of the regiment. It is likely that these 3 officers played a role in convincing the Governor to commission Lindsfelt as the 15th’s Surgeon.

When Surgeon Lindsfelt first reported to the 8th Battery, it was camped with Heg’s Brigade near Murfreesboro, TN. Starting June 23, 1863, the brigade left there to take part in General Rosecrans’ Tullahoma campaign. On July 3, 1863, the brigade camped at Winchester, TN. It was there that Surgeon Lindsfelt examined Robert Cheatam, a young African American servant who was enlisting as an Under Cook in the 15th.

On August 17, 1863, the brigade left Winchester to take part in General Rosecrans’ Chickamauga campaign. Surgeon Lindsfelt is believed to have then been present at the daring early morning crossing of the Tennessee River on August 28th, which the brigade led. He is also believed to have been present at the September 19-20, 1863 fighting at Chickamauga, GA — the second bloodiest battle of the Civil War. If he was there, then it is likely that he served in the Federal field hospital at Crawfish Springs, GA. He would have been very busy treating casualties: Heg’s Brigade suffered 696 killed, wounded, or missing — a staggering 57% casualty rate. One of those killed was Colonel Heg. The 15th suffered 63% casualties, including the death, severe wounding, or capture of every one of its field officers. One of those captured was Lieutenant Colonel Johnson.

After the Federal defeat at Chickamauga, Surgeon Lindsfelt probably accompanied Dr. Himoe and some of the Federal wounded as they retreated from Crawfish Springs to Chattanooga, TN. Surgeon Lindsfelt is then believed to have served in various Army hospitals in Chattanooga during the following 2 months while the Confederate army laid siege to the town. Their siege resulted in severe shortages of medicine, food, and firewood. These shortages, together with cold, wet weather, caused much suffering, sickness, and death in the brigade.

In October 1863, the 15th’s 1st Assistant Surgeon, Dr. John F. Mehlhorn, died, leaving the regiment with no trained medical staff. It had not had a Surgeon since Dr. Himoe had been appointed as Brigade Surgeon in May 1863. The 15th had not had a 2nd Assistant Surgeon since Dr. Daniel P. Wooster had resigned in February 1863. And the 15th’s Hospital Steward, Anthon O. Oyen, had been taken prisoner at Chickamauga. Adding to the shortage of medical staff, Dr. Himoe resigned from the Army on November 13, 1863.

Despite all these troubles, Surgeon Lindsfelt’s appointment to the 15th Field & Staff came at a moment of triumph. Two days earlier, on November 25, 1863, the Confederate siege had been broken by the Union Army’s victorious charge up nearby Mission Ridge, which the 15th took part in. For the 15th the joy was short lived. Starting right after Mission Ridge the regiment was engaged in almost non-stop marching and counter-marching all over eastern TN. This lasted throughout the winter of 1863/1864. By many original accounts, this was the worst period of the regiment’s 3-year term of service. Poor rations, inadequate clothing and shelter, and unseasonably cold weather made these months nearly unbearable.

Despite his having been assigned to the 15th, Surgeon Lindsfelt did not follow them away from Chattanooga right away. It is believed that the Army ordered him to remain there to help with the casualties from the fighting.

There is a record of his marriage to his second wife, Elizabeth (Lizzie) Sabine Conway, on January 19, 1864 in Cincinnati, OH. It is not known if she followed his travels with the military or if she left for WI, awaiting the conclusion of his service.

It was not until February 7, 1864, that Lindsfelt was mustered into Federal service at Chattanooga as the 15th’s Surgeon, with his rank to take effect as of December 6, 1863. Shortly thereafter he left Chattanooga to catch up with the 15th. He officially “joined for duty” with it near Knoxville, TN on February 20, 1864.

Starting in May 1864, the 15th participated in General Sherman’s famous campaign to capture Atlanta, GA. This campaign was marked by almost daily marching and/or combat for 4 months straight. The 15th played a prominent role in the fighting at Rocky Face Ridge, GA in early May; at the bloody Battle of Resaca, GA on May 14-15; and at the disastrous Battle of Pickett’s Mill (often called Dallas or New Hope Church), GA on May 27, 1864. It was there that the 15th suffered fearful casualties, including some 25 men captured (many of whom died later in the infamous Andersonville Prison). The 15th also fought at Kenesaw Mountain, GA on June 23 and before Atlanta on July 22, 1864.

Beginning sometime in July 1864, Surgeon Lindsfelt was listed as “absent sick” from the regiment. On August 10, 1864, the Governor of WI commissioned Samuel Bell to be the 15th’s new 2nd Assistant Surgeon. Starting August 15, 1864, Surgeon Lindfelt was temporarily “detached” from the 15th to serve as the Surgeon of the brigade the 15th was then assigned to (1st Brigade, 3rd Division, 4th Army Corps).

After the capture of Atlanta in early September 1864, the 15th was given a period of rest near the city. Surgeon Lindfelt was recorded as detached as Brigade Surgeon for September. That month he examined and recommended that 2nd Lieutenant James Larson of Company C be granted 20 days of medical leave in WI to recover his health. At the beginning of October 1864, the 15th was sent back north to Chattanooga, where it was briefly assigned to Provost (police) duty. The regiment then spent several months guarding a railroad bridge at Whitesides, TN near Chattanooga. It was an assignment that many in the 15th felt was the easiest duty of their war service.

It is not clear when or if Surgeon Lindsfelt ever rejoined the 15th. It is recorded that in November 1864, he provided medical certificates to support the leave applications of 1st Lieutenants Thor Simonson of Company F. On December 1, 1864, companies of the 15th began mustering out of Federal service in Chattanooga at the end of their 3-year term of service. Dr. Bell, the 2nd Assistant Surgeon, was mustered out on January 1, 1865, and the 15th’s last company mustered out on February 13, 1865. It is not clear when, where, and on what basis Surgeon Lindsfelt left the Army.

Buslett’s 1895 history of the 15th WI has this to say about the regiment’s last Surgeon:

“Lindsfelt was a Finn; the soldiers called him ‘Lappfinn.’ He was an older man and a capable doctor who did not care about differences in rank. As heavy as he was tall and principled, he answered to the name St. Sure (‘certain sure’). Since the war he has lived in his hometown, Sheboygan, and many soldiers have received their pensions on his recommendation. He was still living there in 1886 (he was then 85) and wrote at that time to a friend that he hoped they would not meet again, because following the natural order of things he needed a rest.”

According to primary source documents, St. Sure was living in Sheboygan with his second wife, “Lizzy” in 1870. She died shortly after that. There were no children from their union. St. Sure married for a third time on August 30, 1883 in Portage, WI. His next wife’s name was Olivia/Olive Washburn. When St. Sure died on May 19, 1887, she filed a pension in his name. He is buried in Wildwood Cemetery in Sheboygan.