The Norwegian American Genealogical Center & Naeseth Library is an educational non-profit research center with national and international scope. The Center collects, preserves, shares, and interprets resources for the study of Norwegian heritage.

To carry out this mission, the Center provides:

Through its collections, research, outreach and publication, the Center strives to maintain and enhance its role as the most comprehensive source for information about the history of Norwegian immigration.

Norwegian Americans have produced an exceptional achievement in venerating and preserving the records of their past. They began the work of recording and sharing their heritage even before immigration ceased, and their continuing efforts to perpetuate this history are as impressive as any group in our country.

The Norwegian American Genealogical Center & Naeseth Library is one of America’s leading genealogical research centers. The Center began as the dream of Gerhard B. Naeseth (1913-1994), internationally renowned scholar in the field of Norwegian-American genealogy and immigration history. As early as the 1940’s, Naeseth began collecting the primary resource information and documents relating to Norwegians in the United States. In 1974, when he was associate director of the University of Wisconsin Libraries, Naeseth also established a genealogical research center, located in Madison and associated with Vesterheim Norwegian American Museum. In the 20 years before his death, Naeseth built up this new resource by increasing the library collections, publishing ground-breaking works on Norwegian immigration history, and engaging and mentoring volunteers. By 1984, the genealogical center membership included over 800 households. 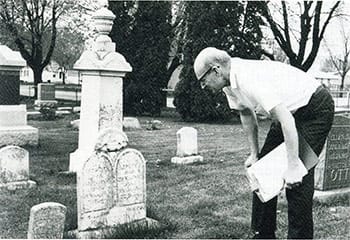 Today, with over 2,000 member households in the U.S., Canada, Japan, and Norway, NAGC & NL has built upon the impressive legacy of Gerhard Naeseth.

This legacy includes not only Naeseth’s entire collection of research and library materials collected over his lifetime, but also the devoted following of hundreds of Norwegian Americans whom he had assisted. Naeseth’s scholarly contribution included the work he began on a projected five-volume biographical directory of the Norwegian immigrants who came to the U.S. between 1825 and 1850. The first volume of this important series was published in 1993. The work to complete this ground-breaking publication was continued by his successor and friend Blaine Hedberg who began his career here as volunteer and became the first Naeseth Chair for Genealogical Research and Publication. Before his resignation in late 2012, Hedberg served here for thirty years, some of them as Executive Director, always working on the completion of Naeseth’s magnum opus. In 2009, Hedberg, together with his Staff colleagues and volunteers, celebrated the appearance of the fifth volume of this series, fulfilling Naeseth’s ambitious goal and creating an important scholarly addition to the body of knowledge in the field of immigration history.

With the aid of modern communications and computers, genealogical research has become one of the most popular activities ever. Researchers from this country, and a growing number of Norwegians seeking information on family members who emigrated, find their way to NAGC either in person or in cyberspace. The Staff and Board of NAGC continue to serve this growing audience, build and share the research collections and databases in our care, publish useful and popular genealogical materials, and reach out to all those who seek to know and venerate their Norwegian roots.