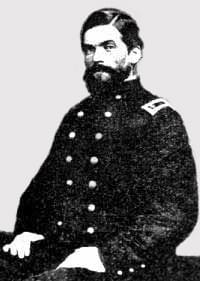 Believed to have been taken circa 1862/1863.
Wisconsin Historical Society, Iconography, ID 89555
Suggest Changes to this Record

Stephen O. Himoe was an 1856 graduate of the St. Louis Medical College and was serving as the surgeon of the 6th KS Cavalry when the Civil War began. At the recommendation of his brother-in-law, Colonel Hans C. Heg, Stephen was appointed surgeon (Feltlæge) of the 15th by WI Governor Randall on November 11, 1861, with rank from the same date.

Stephen was mustered into Federal service at Camp Randall near Madison, Dane County, WI, on February 28, 1862, to date from February 13, 1862. At the time, the Army recorded him as being 29 years old, married, working as a physician and residing in Lawrence, KS. As the regiment’s surgeon, Himoe had a small medical staff, including 1st Assistant Surgeon Søren J. Hansen and Anthon O. Oyen.

Surgeon Himoe left Camp Randall with the 15th in early March 1862, to join the war. In the Army he and Colonel Heg usually tented together. Surgeon Himoe would have participated in the successful siege of Island No. 10 on the Mississippi River in TN, and the surprise raid on Union City, TN, in March and April 1862.

Surgeon Himoe applied for and was granted a 15-day leave of absence starting June 7, 1862. While away in WI he visited Milwaukee and Waterford where his wife and children were living with Colonel Heg’s family. During his absence, Col. Heg took 8 of the regiment’s 10 companies and departed Island No. 10 for a summer campaign through TN, MS, and AL. Before Himoe returned to the 15th its 2nd Assistant Surgeon G. F. Newell resigned from the Army and went home.

“We have a plenty of honey, mutton, chicken, apple sass, sweet potatoes and other garden sass. Gen. Mitchell [their brigade commander] of course will pay for all no matter how big a traitor the owner is and that makes us mad so we jayhawk [steal] all we can and entice away all the negroes we can. I believe, and the government shall find it out some day, though it may be years first, that the only way to put down this rebellion is to hurt the instigators and the abettors of it. Slavery must be cleaned out…The real warfare that we shall carry on for the present will be between Gen. Mitchell and the materials composing his brigade. Col. Heg is quite conservative and wants to please the General; while Lt. Col. McKee, tho’ formerly a Democrat, is as radical as John Brown and does all he can to spite him. We shall have a lively time.”

At the beginning of August 1862, Dr. Alfred H. Whipple was commissioned as the 15th’s 2nd Assistant Surgeon, filling the vacancy caused by Newell’s resignation. In August and September 1862, Surgeon Himoe participated in the grueling 400-mile retreat led by U.S. Major General Don Carlos Buell up to Louisville, KY, with the last 2 weeks being on half rations and short of water. Dr. Whipple became ill during the first half of the retreat and was left behind in Nashville, TN.

Himoe was then present at the October 8, 1862, fighting at Perryville, Boyle County, KY, which was also called the Battle of Chaplin Hills. While this was the 15th’s first big battle, it emerged without any fatalities. On October 10, 1862, he wrote this to his “Dearest Wife”:

“…the rebels broke and ran and were pursued by our men two miles to the village of Perryville, occupied by us at dusk…We captured fifteen wagons loaded with ammunition and 150 prisoners…it is difficult to see how they can get out of the state without being utterly routed, if not utterly destroyed. Lincoln’s emancipation proclamation makes them utterly desperate and if crushed now will never rise again here.”

Even though these men did not report to the regiment until January 13, 1863, Surgeon Himoe served in the brigade position during the December 30, 1862- January 2, 1863 Battle of Stones River, TN, which is also called the Battle of Murfreesboro. It was there that the 15th first suffered serious battle casualties, and was cited for bravery. The regiment endured the fighting and its immediate aftermath with only a Hospital Steward until Surgeon Himoe rejoined the regiment on January 7, 1863. Two days later wrote this in a letter to his wife:

“Murfreesboro is deserted of its inhabitants, every house being either a hospital or a soldiers’ barracks. I have been in town several times since its occupation and have seen only one woman and child in it. This is a terrible reality to the southern people at least, and it is impossible to give you the faintest idea of the horrors it inflicts upon them…Our loss in killed, in wounded and missing foots up to 119, being more than one-third of the number that went into the fight…The Fifteenth regiment, while suffering thus severely, has earned a reputation for patriotism and bravery of the highest order, and it is a glorious honor to belong to it.”

The 15th camped in the Murfreesboro area for the next 6 months, except for 2 weeks in February when it was sent to Franklin, TN. Surgeon Himoe was again detached from the regiment in February 1863 by order of U.S. Major General William S. Rosecrans, to command Army Hospital No. 2 on Woodbury Pike in Murfreesboro, TN. While he was away, the 15th’s 2nd Assistant Surgeon Daniel P. Wooster resigned and went home barely 6 weeks after arriving at the regiment.

Surgeon Himoe rejoined the 15th on April 24, 1863. About this time Colonel Heg was made commander of the newly formed 3rd Brigade, 1st Division, 20th Army Corps, which included the 15th. Colonel Heg appointed Dr. Himoe to be Brigade Surgeon on May 1, 1863. Starting May 18, 1863, Surgeon Himoe was granted a 15-day leave of absence from May 25 to June 8, 1863, which he spent in WI. While he was away, Oscar Trenkler resigned, leaving the regiment without a doctor again.

Surgeon Himoe was back with Heg’s Brigade before June 23, 1863 when it left Murfreesboro to take part in General Rosecrans’ Tullahoma campaign. On July 3, 1863, it went into camp at Winchester, Franklin County, TN for 6 weeks. On August 10, 1863, Dr. John F. Mehlhorn was commissioned as the 15th’s 1st Assistant Surgeon, which meant it once again had a doctor.

On August 17, 1863, Heg’s Brigade left Winchester to participate in General Rosecrans’ Chickamauga campaign. On August 29, 1863, the brigade became the first Federal unit to cross south over the Tennessee River. Surgeon Himoe described the day in his diary:

“We move down to the river at sunrise and by 7 o’clock the brigade is in the boats which are immediately launched and rapidly rowed across the river. The rebel pickets fled without firing a shot, leaving their half cooked breakfast behind them. Our pontoon bridge is completed by noon; we cross over our horses and proceed to the summit of Sand Mountain where we bivouac about six miles from the river…”

After 3 weeks of arduous marching in the wild, mountainous area south of the river, the brigade took part in the September 19-20, 1863, fighting at Chickamauga, GA — the second bloodiest battle of the entire war. During the fighting Dr. Himoe served in the 1st Division Field Hospital at Crawfish Springs. There he helped take care of the thousands of Union soldiers who were wounded in the battle, including many from the 15th. Some 63% of the regiment’s soldiers who were at Chickamauga were killed, wounded, or taken prisoner there. Amongst the wounded was Colonel Heg, who was wounded late on the 19th and, despite Dr. Himoe’s personal care, died in the hospital on the 20th. Dr. Himoe recorded this in his diary for that day:

“The Col. [Colonel] died at fifteen minutes before 12 o’clock Mr. [noon] and I sent his remains immediately to Chattanooga in charge of Lt [Selah] Mathews… It was agonizing to stand beside the Col and see him suffer and die — Col La Grange of the 1st Wis Cav [Cavalry], and other friends who called to see him, wept like children. Everybody who knew him loved him. He was not only a noble patriot, but a true Christian and died peacefully and calmly, fully persuaded of a glorious immortality thro’ Jesus…”

Dr. Himoe followed the retreating Federal army into Chattanooga, TN, helping the 15th’s Major George Wilson into the city and then operating on his wounds. Shortly afterwards the 15th’s Hospital Steward Anthon O. Oyen was taken prisoner when the hospital at Crawfish Springs was surrendered. The Confederates advanced to the hills overlooking Chattanooga and laid siege to it, which caused severe shortages of medical supplies, food, and firewood. These shortages, together with cold, wet weather, caused much suffering, sickness, and death. On September 25, 1863, Himoe wrote this to his wife:

“Our sorrow is very great, this is no time for tears. Our brave army crushed and bleeding, our best and noblest men torn and dying require the most careful and devoted attention that the surgeon has in his power to render. Our army is terribly broken by vastly overwhelming numbers, but concentrated around Chattanooga, will never surrender the place to the enemy while a single battalion remains to die in its defence. The country must and shall be saved. The regiment today numbers 130 men, and works in the trenches in front. [Lieutenant] Colonel Hans Hanson are missing and probably killed. My duty is here for the present and I am content.”

On September 28, 1863, Surgeon Himoe was ordered to help open the 1st Division Hospital in Chattanooga. A week later he was ordered to consolidate the Division Hospital into General Hospital No. 2 there. On October 18th he replied to a letter ordering him to appear before the Army Medical Examining Board at Cincinnati, OH to be considered as a candidate for Surgeon of Volunteers. At some point in October 1863, the 15th’s only remaining doctor, John F. Mehlhorn, died, leaving the regiment without any medical staff. Surgeon Himoe then rejoined the 15th on November 5, 1863, which was then camped near Chattanooga. However, on November 13, 1863, he abruptly resigned from the Army and returned to his family with the Heg’s in Waterford. This was 3 days before he was scheduled to appear before the Army Medical Examining Board. He was replaced by Surgeon A.F. St. Sure Lindsfelt.

In December 1863, Dr. Himoe moved to Fort Scott, KS, where he resumed his private medical practice. In the spring of 1864 his family joined him and they lived there until October 1865 when he and his family moved to Laurence, KS. His first wife died there in 1880. At one point, fellow 15th veteran Albert Skofstad was Himoe’s patient. The following is from the History of the State of Kansas:

“Dr. Himoe…removed to Lawrence and engaged in the manufacture and sale of patent medicines. His preparations, especially the Peruvian Tonic, Pulmonic Elixir, Carbolic Liniment, Blackberry Cordial, and Cathartic Pills, are extensively sold in nearly all the States and Territories west of the Mississippi River.”

In 1885, Dr. Himoe moved to Kansas City, MO, where he practiced medicine until his death 19 years later, shortly after his 71st birthday.