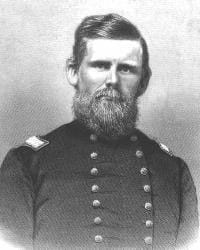 This is the third portion of E. B. Quiner’s history of the 15th Wisconsin, which fought in the Federal (Union) Army during the American Civil War (1861-1865). This portion covers the time period of December, 1862, to June, 1863. Information within brackets [ ] has been added to the original text by the webmaster to help modern readers understand what Mr. Quiner rightfully assumed mid-19th century readers would automatically know. Alternative spellings of 15th soldiers’ names have also been added within brackets by the webmaster, using spelling from the 15th’s official muster rolls. Finally, hot links have been added that will take you to on-line transcriptions of official documents and soldiers’ letters, and to profiles of soldiers, which contain additional information about the 15th or its soldiers. Enjoy!

Source: Quiner, E. B., The Military History of Wisconsin: Civil and Military Patriotism of the State, in the War for the Union. Chicago, Illinois: Clarke & Company, Publishers, 1866. Chapter XXIII, pages 618-622.

“Returning to Edgefield Junction, the regiment moved to Nashville, and remained in camp, engaged in occasional skirmishing, or guarding forage trains, until the 26th of December, when they marched in company with the forces of General Rosecrans, to take part in the battle of [Stones River, also known as] Murfreesboro.

Davis’ division was in the right wing of the army, under General McCook, on the extreme right, and took position as the advance division. About one o’clock, P.M., the enemy was found in position near Nolinsville, drawn up in line of battle. A battery opened on the advancing division, which proved very annoying, and was only silenced by Carlin’s brigade swinging round to flank their position, when they limbered up and started to the rear.

In front of Carlin’s division, about a mile distant, was a deep cut or gorge in the mountain known as Knob Gap, through which the Nolinsville and Triune turnpike passes. This gap is about 300 paces in width, closed in by steep bluff walls. Here the rebels had placed eight pieces of artillery, with a large force of dismounted cavalry in support. An order to Colonel Carlin, directed that the battery be taken at any risk. It looked like a hopeless job, but Colonel Carlin quietly turned to Lieutenant Colonel [David] McKee, of the Fifteenth, and ordered him to take command of the skirmishers, and advance rapidly. McKee knew the danger of the undertaking, but immediately responded to the order, and taking one company from each regiment of Carlin’s brigade, deployed them in front, and pushed rapidly forward towards the gap, followed by the brigade. The rebel battery of eight guns, opened with shell, and fired with fearful rapidity. Steadily, that little band, under their indomitable leader, pushed on amid the bursting shell, and other missiles, through cornfields and woods, and up and down hill, to the very cannons’ mouths. The skirmishers are near enough, and open fire. The rebels reply with canister. The brigade soon gets with in range, and opens fire along the whole line, and with a yell, make for the battery. The men were so exhausted they could not get up a double quick. Colonel [Hans C.] Heg dashed forward on his horse, and the Fifteenth following with bayonets at a charge, drove the enemy, who limbered up and retired, leaving one gun. Colonel Heg rode forward on his horse, and with Lieutenant Colonel [David] McKee, took possession of the piece, a trophy for the Fifteenth Wisconsin.

Bivouacking at the Gap, next day the command advanced two miles, and camped, remaining till Monday, the 29th, when they again moved towards Murfreesboro, and bivouacked, without fires, the men resting on their arms.

On the morning of [December] the 30th, line of battle was formed, and the regiment advanced. Company E, Captain [John] Ingmundson, was sent forward as skirmishers, who reported to Lieut. Col. [David] McKee, in command of the skirmish line. The enemy was encountered by the skirmish line, about 12 o’clock. About 2 o’clock, the Fifteenth was ordered to advance and occupy the position held by the skirmishers, which was done, and Colonel Heg found that Captain Ingmundson had been killed, and one of his men wounded. Driving in the enemy’s skirmishers, the regiment advanced slowly, through a heavy cedar thicket, under a severe fire of grape and shell, Colonel Heg found the enemy in heavy force behind a rail fence, near the house of Mrs. William Smith. His regiment continued to advance, notwithstanding the heavy fire, to within a hundred yards of the enemy’s line, when another battery, on his left and front, opened a cross fire of grape and canister on his command. The regiment onthe right of the Fifteenth, being unable to stand the enemy’s fire, began to retire, when finding his flank thus exposed, Colonel Heg directed his regiment to fall back slowly. This they did, facing twice to the enemy, and delivering their fire, in going 200 yards, and taking position behind a fence, about 300 yards in advance of the enemy, which they held till after dark, taking off their killed and wounded. Their loss in this day’s fight [December 30, 1862] was six killed and thirty-five wounded.

At 8 o’clock in the evening, the regiment was relieved by the picket guard, under Lieutenant Colonel McKee, and retired about 400 yards to the rear, where they rested on their arms, without fires.

Early next morning, the regiment was in line of battle, with full ammunition boxes. A brisk firing was heard to the right. It proved to be the attack of the rebels on Johnson’s division, which occupied the extreme right of the right wing, next to which was Davis’ division, in which the Fifteenth was brigaded. Colonel Heg held the position occupied during the night, till the battery on his right retired, when he fell back about 300 yards, to its support. The battery again retired, to the vicinity of a house, which was occupied as a Union hospital. The regiment retired with it, and again acted as its support.

Being anxious to rejoin the brigade, Colonel Heg wheeled his regiment to the right, and advanced in the direction where the brigade was posted, with a view to assist in keeping the enemy in check. He took position near a fence, in the rear of the Thirty-eighth Illinois, which was then holding the enemy at bay. During this time, the forces of Johnson were retiring before the advancing enemy. The Thirty-eighth Illinois also retired, and the Fifteenth opened fire on the enemy, who was then within 200 yards, advancing towards them in solid column. The position was held until the appearance of a heavy force on the right left no alternative but to retire or be taken prisoners. While engaged at this point, Lieutenant Colonel McKee and several others were killed, and several wounded. From this position, Colonel Heg found great difficulty in extricating his command, as he had to retire through an open field, with the enemy accumulating a heavy force on his right flank, which was pouring in a terrible fire. Joining the remains of Carlin’s brigade, near the hospital on the hill before mentioned, the command retired to the Murfreesboro Pike, where the rest of the right wing had congregated, between the railroad and pike. The regiment again took position behind a fence when within 400 or 500 yards of the pike, and opened fire, but the overpowering numbers of the enemy, compelled them again to retire. Crossing the turnpike, the men were again rallied at the railroad track, where they remained during the rest of the day. Here in the railroad cut, which passed through a hill, Rosecrans massed his infantry, and concentrated a large number of his guns. As the triumphant rebels would rush up in pursuit of our retiring forces, these guns would open, and the infantry would deploy from the railroad cut and pour in a devastating fire, and their ranks would go down like grass before the mower.

The command remained in this position during the lst and 2d of January, 1863, engaged in skirmishing with the enemy’s pickets. On the evening of the 2d, they moved across Stones River, where the left wing, under General Crittenden, had been stationed, from which it had been forced to retire, taking position on a high point of land in front of the enemy, three-fourths of a mile from the river, where they remained until the morning of the 4th, constantly skirmishing with the enemy’s pickets, in a drenching rain, without fires or shelter, and with scanty rations. For five days Colonel Heg’s regiment fought or skirmished almost continually, without a word of murmuring or dissatisfaction. In this engagement, our Scandinavian soldiers displayed a courage and endurance, second to no regiment on that bloody field.

Lieutenant Colonel [David] McKee was killed instantly, by a shot in the head. Captain [John] Ingmundson was also killed. The loss of these officers was a sore calamity. Captains [George] Wilson, [Mons] Grinager, and Lieutenant [Thor] Simonson, were wounded in the engagement on the 30th, but remained with their companies, and brought them, in good order, off the field. Captain [Carl] Gustaveson was slightly wounded in the foot.

The casualties, from December 30th to January 4th, 1863, [at the Battle of Stones River/Murfreesboro] were reported, as follows:

After the battle with the rest of [General] Rosecrans’ army, the regiment went into camp near Murfreesboro, where they suffered severely for the want of warm and comfortable clothing, provisions and tents. The enemy had obstructed the railroads, and supplies were with great difficulty got forward.

The regiment remained in camp south of Murfreesboro until the 23d of June, except about two weeks in February, when the division was sent to Franklin.”