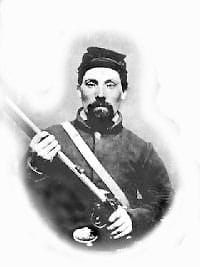 This is the seventh and final portion of E. B. Quiner’s history of the 15th Wisconsin, which fought in the Federal (Union) Army during the American Civil War (1861-1865). It covers the time period of September, 1864, to February, 1865. Information within brackets [ ] has been added to the original text by the webmaster to help modern readers understand what Mr. Quiner rightfully assumed mid-19th century readers would automatically know. Alternative spellings of 15th soldiers’ names have also been added within brackets by the webmaster, using spelling from the 15th’s official muster rolls. Finally, hot links have been added that will take you to on-line transcriptions of official documents and soldiers’ letters, and to profiles of soldiers, which contain additional information about the 15th or its soldiers. Enjoy!

Source: Quiner, E. B., The Military History of Wisconsin: Civil and Military Patriotism of the State, in the War for the Union. Chicago, Illinois: Clarke & Company, Publishers, 1866. Chapter XXIII, page 631.

“Here [Atlanta, Georgia] they remained engaged in the performance of picket duty, foraging, etc., up to the 30th of September, when the regiment proceeded to Chattanooga, [Tennessee] and engaged in provost duty until the 18th of October, when they were ordered to guard the railroad bridges between Chattanooga and Whitesides, with headquarters at the latter place, where they remained until mustered out of service.

We find the following casualties reported as having occurred after the battle at Kenesaw Mountain:

Lieutenant Colonel [Ole C.] Johnson succeeded in escaping from the rebel prison and rejoined the regiment on the 24th of July, 1864, and took command. Through the Atlanta campaign to that time, Major [George] Wilson was in command.

Muster Out at Chattanooga, Tennessee

There being more than two months difference between the muster of the first and last companies, the regiment was mustered out by companies. Companies B, A and E, were mustered out on the lst of December, 1864, Company C, January 1st, 1865, G and F, January 14th, I and K, February 11th, D and H, February 13th, 1865. Lieutenant Colonel [Ole C. ] Johnson mustered out with the last Company.

The several companies, as they were mustered out, returned to Wisconsin, were paid off and disbanded. Thus closes the history of one of the bravest and most efficient regiments that Wisconsin has sent to the field