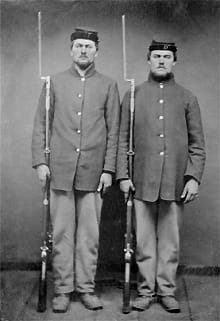 This is the first portion of E. B. Quiner’s history of the 15th Wisconsin, which fought in the Federal (Union) Army during the American Civil War (1861-1865). This portion covers the time period of February, 1862, to May, 1862. Information within brackets [ ] has been added to the original text by the webmaster to help modern readers understand what Mr. Quiner rightfully assumed mid-19th century readers would automatically know. Alternative spellings of 15th soldiers’ names have also been added within brackets by the webmaster, using spelling from the 15th’s official muster rolls. Finally, hot links have been added that will take you to on-line transcriptions of official documents and soldiers’ letters, and to profiles of soldiers, which contain additional information about the 15th or its soldiers. Enjoy!

Source: Quiner, E. B., The Military History of Wisconsin: Civil and Military Patriotism of the State, in the War for the Union. Chicago, Illinois: Clarke & Company, Publishers, 1866. Chapter XXIII, pages 613-615.

Passing through Chicago, the regiment was presented with a beautiful flag, by the Scandinavian “Society Nora.” The motto on the flag was, [“For Gud og Vort Land”] “For God and our country.” On one side was the American colors, with gilt stars on a blue field. On the reverse were the American and Norwegian arms, united; the Norwegian arms representing a lion with all axe, on a red field. On the flag was inscribed, “Presented by the Society Nora, of Chicago, to the Scandinavian Regiment, March 1, 1862.” The flag was presented by C. Ditrickson, Esq., accompanied with a speech in the Norwegian language, which was appropriately replied to by Colonel Heg. The regiment went immediately aboard the [railroad] cars, and reached St. Louis on the morning of the 4th and were ordered by General Halleck to proceed to Bird’s Point [Missouri], opposite the mouth of the Ohio [River], at Cairo [Illinois]. There they found comfortable barracks, and Colonel Heg assumed command of the post, leaving Major Reese in command of the regiment. There they remained, engaged in guard duty in the entrenchments, until the 14th of March, when, pursuant to orders, Colonel Heg embarked his regiment with the exception of companies C, D and K, on the transport Silver Wave, and joined the expedition of Commodore Foote against Island No. 10, near New Madrid, [Missouri] forming, with the Twenty-seventh Illinois, the land forces which accompanied that expedition, and arrived before the enemy works on the 15th, when the bombardment was immediately commenced. Here the regiment remained for some time, inactive, except the performance of a little picket duty, on a point of land on the Missouri shore. At this time the surrounding country was flooded, and but little dry ground could be found to encamp on. This compelled the troops to remain on the transports where they suffered much from the cold, and the inadequate means of cooking their rations.

On the 31st of March, a portion of the regiment participated in an attack on a rebel camp near Union City, to the east of the town of Hickman, Ky [Kentucky]. Proceeding up the river to Hickman, they made a forced march to Union City, near which they surprised the camp of a band of rebels, under the notorious Clay King, completely routing them, and destroying their camp and its contents, and capturing about a hundred horses and mules, and several wagons. Company G captured a secesh battle flag, which was sent to the Governor of Wisconsin as a trophy, with another, which was subsequently captured at Island No. 10.

Capture of Island No. 10, Tennessee

The regiment returned to New Madrid, where it remained till Island No. 10 was evacuated, on the night of the 7th of April, when it was sent to occupy the Kentucky shore, opposite the Island, where the rebels had erected several batteries. They took possession of the camps of the enemy, in which they found a large amount of stores of all kinds. On the departure of the forces of Commodore Foote and General Pope, the Fifteenth was left to garrison the Island, and to gather up and protect the immense stores of ordinance and other articles, which had been captured. The situation was found to be quite unhealthy, and the duty of the regiment was very severe and laborious. The companies left at Bird’s Point, joined the regiment at Island No. 10.”