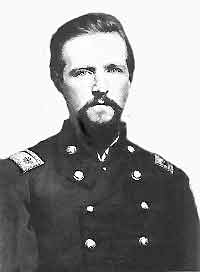 This is the fifth portion of E. B. Quiner’s history of the 15th Wisconsin, which fought in the Federal (Union) Army during the American Civil War (1861-1865). This portion covers the time period of October, 1863, to April, 1864. Information within brackets [ ] has been added to the original text by the webmaster to help modern readers understand what Mr. Quiner rightfully assumed mid-19th century readers would automatically know. Alternative spellings of 15th soldiers’ names have also been added within brackets by the webmaster, using spelling from the 15th’s official muster rolls. Finally, hot links have been added that will take you to on-line transcriptions of official documents and soldiers’ letters, and to profiles of soldiers, which contain additional information about the 15th or its soldiers. Enjoy!

Source: Quiner, E. B., The Military History of Wisconsin: Civil and Military Patriotism of the State, in the War for the Union. Chicago, Illinois: Clarke & Company, Publishers, 1866. Chapter XXIII, pages 625-627.

“On the 11th of October, the army of the Cumberland was reorganized, and the Fifteenth Wisconsin was assigned to the First Brigade, Brigadier General Willich, Third Division, Major General Wood, of the Fourth Army Corps, Major General O.O. Howard. From the battle of Chickamauga up to this time, the regiment had been kept constantly in the trenches, and suffered terribly, but they were now ordered into camp [near Chattanooga, Tennessee], and were more comfortably situated. About one hundred of the regiment were detailed as guard to a provision [wagon] train to Stevenson, [Alabama] the remainder, on the 17th of October, being sent on duty to the north side of the river, to build pontoons, etc. The whole regiment was again together, with the brigade, on the 7th of November.

The Fifteenth was put on guard duty in Fort Wood, until the 23d of November, when the whole army moved out of their works, to attack the rebels on Mission Ridge [across the Tennessee River from Chattanooga]. On the 24th General [Joseph] Hooker drove them from Lookout Mountain, and the army of the Cumberland drove them from their front into their works near the foot of the ridge. The Fifteenth Wisconsin and Thirty-second Indiana did the skirmishing that day, and first occupied Orchard Knob. At a given signal from Fort Wood, on the 25th, the whole line advanced, drove the enemy from his works at the foot of the Ridge, and with a yell and cheer, started up the Ridge, drove the enemy, captured all his artillery, and a great number of prisoners, the Fifteenth suffering but a trifling loss, having only 6 men wounded. On this day, Major George Wilson returned and assumed command of the regiment.

Instead of being allowed a short time for rest, as they had a right to expect, after the excessive and laborious service which had been required of them, the Fifteenth was ordered, with the brigade, to march on the 28th [of November, 1863], to Knoxville, in East Tennessee, which place was then besieged by [Confederate] General [James] Longstreet. This expedition was under the command of General [William T.] Sherman. After a fatiguing march of 110 miles, with scant rations, and the men suffering for clothing and shoes, they reached Knoxville on the 7th of December. The service of the Fifteenth in this campaign in East Tennessee, was one of great hardship, and was of a character which possesses little of historical importance, interesting to the general reader. It was a constant marching over intolerable roads from place to place, remaining only long enough for the men to indulge in the hope that they would be allowed once more to pitch their tents and enjoy a little rest, when orders would be received to move to another point, where the same scene would be reenacted. So disgusted and disheartened did the men become, that only seven of the whole regiment finally reenlisted as veterans, although at one time all but five had consented to do so. There seemed to be an unnecessary amount of hardship put upon this regiment in that campaign.

No engagement of importance occurred with the enemy in East Tennessee, except one with Wheeler’s cavalry, at Charleston, in which a detachment of convalescents of the Fifteenth took part, and in which the enemy lost 10 killed and 167 wounded and prisoners. After spending the winter in guard duty at various points, and remaining but a few days at any one place, they finally reached Strawberry Plains [Tennessee] on the 9th of March, where they were engaged in railroad guard duty, picket duty, and labor on the fortifications, until the 7th of April, when they received orders to join the army of the Cumberland, marching 108 miles, and encamping on the 16th, at McDonald Station, on the East Tennessee and Georgia Railroad, between Chattanooga and Cleveland.”