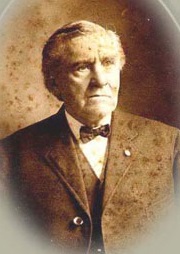 www.findagrave.com
Suggest Changes to this Record

Ole Heg was born in Lier, Drammen on June 21, 1831, son of Even Hansen Heg and Sigrid Olsdatter Kallerud. He was the brother to Col. Hans C. Heg. He came to America with his parents, brother, Hans, and two sisters, Andrea and Sophie, on Emilie, which sailed from Gothenburg, Sweden and arrived in NY on August 12, 1840. They came to Muskego, Racine County, WI. He married Emilie Christensen who died in 1860. Heg then married her sister, Nanna, on January 27, 1861.

After the war, he worked as a printer. Heg had two children: Sergria (1857) and Ernest (1865). He lived in McMinnville, Warren County, TN, then Kansas City where he worked as a retail grocer. He then became a merchant in Chicago. In 1902, he moved to Burlington, Racine County, WI. Ole Heg died on April 18, 1911, in Burlington. He and his wife, Nanna, are buried in Norway Cemetery, Norway, Racine County, WI.