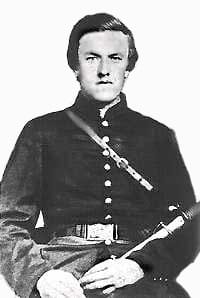 Odin Anton Olesen Øyen was born on October 8, 1841 to Ole Olsen Øyen and Catharina Elisabeth.  In later recoreds he used the name Anton Odin. He immigrated about 1860 or 1861.

When the war started, he was enlisted under the name Anthon O. Oyen in Company A of the 15th WI at the rank of Private (Menig) by Captain Andrew Torkildson on October 8, 1861, at Chicago. Anthon enlisted just a few months after arriving in America.

Anthon was appointed as the 15th’s Hospital Steward (Hospitalsstewart) on January 18, 1862, to rank from November 18, 1861. It is said he had been trained as a pharmacist in Norway, and had taken his exam at Bodø Apothecary just before coming to America. At the time of his appointment the 15th’s medical staff was commanded by Surgeon Steven O. Himoe, with Assistant Surgeon Soren J. Hansen as second-in-command, and 2nd Assistant Surgeon G.F. Newell as third-in-command.

Oyen was mustered into Federal service at Camp Randall near Madison, WI, for a 3-year term on February 28, 1862, to date from February 13, 1862. At the time he was 21 years old and listed his residence as Chicago. On March 2, 1862, Hospital Steward Oyen departed Madison with the rest of the 15th to join the war effort down south.

During his military career, Hospital Steward Oyen was captured twice. The first time was on December 31, 1862 during the Battle of Stones River in TN, also called the Battle of Murfreesboro. There he was wounded and captured by Confederate Cavalry, but was soon set free by Union troops. The next time was during the fighting at Chickamauga, GA — the second bloodiest battle of the war. Here is his account of what happened there, drawn from a letter he sent Lieutenant Colonel Ole C. Johnson in 1866:

“In the Battle of Chickamauga, Georgia, on 20 September 1863, when our army had to retreat before a superior force, I was ordered by our division’s medical director, against my will, to halt at our division general’s field hospital, since I was the only medic who was left on that part of the battlefield (because all the other medics, as far as I know, had packed up their things early in the morning and retreated as quickly as possible back to Chattanooga). This hospital was filled with about six hundred men, sick and wounded. In the afternoon when our army had retreated from the battlefield, one of Rebel General Wheeler’s Texas Cavalry regiments came up to our hospital, which lay in Crawfish Springs, Georgia, and requested the hospital’s medical director to surrender with all the sick and wounded, and subordinate men. We surrendered, which was obviously the only way out of the situation we were in.”

On October 2, 1863, Oyen and the other prisoners were moved from Crawfish Springs to Ringgold, GA, by railroad train to Atlanta, GA, and then finally to Richmond, VA. He arrived there October 11, 1863, and was processed at Libby Prison, “robbed of 25 dollars” by an infamous Confederate Major named Turner, and placed in a prison called Castle Pemberton.

“Here some eleven hundred men were now locked up as prisoners, and all of the atrocities that were committed on both sides here are impossible for any pen to describe. I stayed here for six weeks and in that time was so exhausted by hunger that I could scarcely walk across the floor.”

On November 22, 1863, Oyen was transported by railroad train to Danville, VA, where he was again placed in prison. A few days later he was removed to a nearby hospital to help care for sick Union soldiers. In mid-December 1863, he contracted “smallpox”, but recovered enough to resume working after a few weeks.

In mid-January 1864, Oyen accepted a Confederate request to take over the local smallpox hospital, which lay a mile outside of town. He escaped from there on the night of February 22, 1864, but was caught about a mile away by a sentry who was posted to look for deserters.

Oyen was then confined in Prison Number 5 at Danville until April 3, 1864, when he was taken by railroad train to the infamous Andersonville prison camp in GA. There on May 26, 1864, he was appointed Assistant Prisoner-Pharmacist and assigned to the prison hospital, which was outside of the stockade. With this job came access to more and better rations, and the ability to get other prisoners appointed to jobs outside the stockade.

“I often smuggled food in to the boys of my Regiment who lay sick in the hospital — flour, beans, and other things when I had the chance…When some of my friends in the Regiment were well enough to do some work, I usually got them out of the prison on parole. I can name three of these: Sergeant Major Martin A. Erickson, who later died in Sparta, Wisconsin, was appointed as a clerk in the Doctor’s office, and Sergeant Bernt J. Madsen of Company B was appointed as assistant medic in a ward of the hospital, as were Private Ole C. Branstad of Company A and many others from other regiments.”

Hospital Steward Oyen remained at Andersonville Prison until nearly the end of the war. On March 18, 1865, he and other prisoners were sent west by railroad train to Jackson, MS. From there they were marched 36 miles to Black River, MS, where they were released to Union forces and taken to Camp Fisk, near Vicksburg, MS.

“This was on the evening of 27 March, and after an imprisonment of 18 months and seven days I stood again under the dear banner of freedom — the stars and stripes — which I had once sworn to live and die for.”

On May 10, 1865, Hospital Steward Oyen arrived back in Madison, WI, where he was honorably discharged from the Army on May 25th, almost 3 months after the expiration of his 3-year term of service. He then returned to Chicago, where he served on the police force for nearly 20 years, and then worked for a time at City Hall before passing away from heart disease.