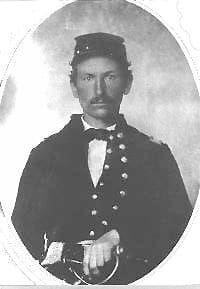 Photo believed to have been taken sometime after July 1862.
Wisconsin Historical Society, Iconography, ID 89863
Suggest Changes to this Record

James Larson was born on May 17, 1835 in Christiania, Norway to Martha Jenson and Lars Hanson Lee. In 1852, he immigrated to WI. There, he met and married Martha Wettleson on February 13, 1858 in Stoughton, Dane County, WI.

Larson joined the WI 15th Infantry, Company C. The army listed him as living in Perry, Dane County, WI, age 27, and married. He enlisted for three years on January 25, 1862 at Perry, and mustered on February 28, 1862 at Madison, WI. Larson was named Regimental Commissary Sergeant (Sersjant). Commissioned Second Lieutenant (Løytnant), at Jacinto, MS, on July 6, 1862, effective from the 9th, and assigned to Company C. Larson became acting Quartermaster Officer in April 1863. In May 1863, he was acting Commissary Officer of the Brigade. He was in command of the supply train of the 1st Division in September 1863. Because of illness, he was left behind in Chattanooga on November 28, 1863. Larson was the temporary commander of Company A, then made acting post commander at Strawberry Plains in March 1864. He was appointed ambulance director at Brigade Headquarters in April 1864 and then promoted to First Lieutenant on October 19, 1864. He was absent due to illness on September 29, 1864. He was mustered out with Company C on January 1, 1865 at Chattanooga, TN.