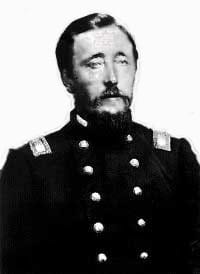 Ole C. Johnson (Shipness) was the recruiting officer for Company B, the “Wergeland Guards,” named after Henrik Wergeland the famous Norwegian poet and writer. At the recommendation of the 15th’s commander, Colonel Hans C. Heg, Ole was appointed Captain (Kaptein) of Company B by WI Governor Randall, with rank from November 12, 1861 for a 3-year term of service. At the time he was 24 years old and not married, had an excellent command of English and Norwegian, but lacked any military experience. He was a school teacher living in Stoughton, Dane County, WI and studying Greek at Beloit College in preparation for getting a law degree.

After participating in the Battle of Perryville, Kentucky, Captain Johnson was appointed to the rank of Major by the Governor on November 8, 1862, to rank from November 1, 1862. As 3rd in command of the regiment, Major Johnson participated in the long, cold, bloody Battle of Stone River (also called Murfreesboro), TN in late December 1862. He took temporary command of the 15th during February 1863 while Colonel Heg was away. Johnson was then appointed to the rank of Lieutenant Colonel (Oberstløitnant) by the Governor on March 7, 1863, to rank from February 26, 1863. Lieutenant Colonel Johnson took formal command of the 15th starting in May 1863 when Colonel Heg was promoted to command a brigade.

Lieutenant Colonel Johnson led the regiment at its daring early morning crossing of the Tennessee River on August 28th, where the 15th was the first Federal unit across. He also led the regiment during the September 19-20, 1863 fighting at Chickamauga, GA — the second bloodiest battle of the Civil War. There he survived the vicious fighting around Viniard’s Farm on the first afternoon, but was captured around midday on the 20th during Longstreet’s Breakthrough (he was initially listed as missing in action “supposed to be killed”). Some 63% of the 15th’s soldiers who were at Chickamauga were killed, wounded, or taken prisoner. In a letter written that fall from the infamous Libby Prison, Johnson had this to say about what happened next:

“When we were captured, many of us were rounded up and led back to Chickamauga Creek by a captain on General Hindmand’s staff, who, as previously stated, was a gentleman. He showed no vindictiveness and did not permit his soldiers to take the canteens and knapsacks from the prisoners — which they tried to do. I gave him my field glass, which I knew I would not be permitted to keep anyway, and could just as well give to one who had the courage to step forward and fight for what he believed to be right… From Chickamauga Creek we were taken two-three miles farther to the troops in the rear, where we found the men who had been captured on Saturday, and at four o’clock we were sent on our way to Ringgold, a distance of twelve miles, where — we were told — we would stay overnight and get something to eat… At nine o’clock in the evening we arrived at Ringgold, tired and hungry, and were told we must go four miles further before we could receive rations and leave by train for Atlanta. At eleven o’clock we arrived at a railroad station the name of which I have forgotten and were allowed to light fires. But the night was cold and we got little rest and less sleep. The next morning we were given the unwelcome news that we must go another four miles — on foot — before we could get anything to eat. At eight o’clock we were on our way, and we arrived at Tunnel Hill at ten. A detachment was immediately set to work baking some cornbread, but before this was ready, we were put aboard a train and started for Atlanta. Thus for the third time we were disappointed in not receiving anything to eat, and our one hope now was Atlanta. If it had not been for the fact that some of the prisoners had a supply of rations when they were captured — which they willingly shared with me — I surely would have starved…”

What they did when leaving Atlanta, GA, was described in a letter from Libby Prison written that fall to his brother John A. Johnson:

“Thursday morning we were marched through the city to the [railroad] station, and we sang, so it rang in the streets: The Star Spangled Banner, The Red, White and Blue, and The Battle Cry of Freedom, especially stressing “Down with the traitors, and up with the stars.” The citizens got out of their beds and came to their windows, but never said a word. Later we had the pleasure of seeing ourselves described in the Atlanta newspapers as “the most objectionable, the filthiest and the most God-forsaken prisoners” they had ever seen.”

From Atlanta, Johnson and the other prisoners were transported by railroad train to Richmond, VA, which is where he came to be incarcerated in Libby Prison. While there he shared space with Captain Charles Gustafson, studied German, and wrote letters home. On the back of some of these letters he added notes using invisible ink made with onion juice. This was done in order to sneak information past the prison censors. Here is a portion of one of his secret notes:

“…our government shows no inclination to exchange prisoners. In truth, it seems to have turned its back on these men without desire to come to their aid. I do not like to believe such a thing about our government, but things seem to point in that direction…we are quite sure about one thing, and that is that the Rebels would very much like to have an exchange…How many, do you think, of those here now will ever get to see their homes again…If these men are not to be sacrifices to indifference, they must be set free, and the only way to free them is to exchange them.”

In December 1863, the Confederate authorities began transferring their enlisted captives to prisons further south. Lieutenant Colonel Johnson referred to this in a post-war speech he gave at Albion College in WI:

“I can forget many things, but I can never forget how our people looked when they marched past Libby on the way to the train to be sent south. The strongest ones naturally came first, then those who weren’t as strong and could not keep up with their comrades, and they continued in this way until the column became more and more like a row of ghosts, until finally the last ones came, supported by their comrades and looking around with empty, wild glances, like skeletons who neither knew nor cared where they were going. This sight will follow me until my dying day, and now — after many years — I almost become sick when I think about it. I consider this bitter, cruel, inhuman treatment of our prisoners to be an unforgivable crime by the Rebel government, the blackest of all the black marks on its escutcheon. It would not have cost the Rebels anything to distribute to the prisoners what the [U.S.] government had sent, but instead of doing this, in accordance with the agreement, they stole the food and clothing from the prisoners who were starving and freezing to death.”

Four months later he was ordered farther south. He and his fellow prisoners believed (wrongly) that they were being sent to the notorious Andersonville Prison in GA. This belief spurred him to dare an escape and on May 11, 1864 at Chesterville, SC when he and 2 TN officers escaped from a railroad box car. After the war he released a memoir, which contains this account of the 7th day of their escape:

“Tuesday the 17th: Last night was good; but we only covered some six or seven miles because of fatigue. We are extremely exhausted; the eight months of imprisonment, exposure, and overexertion since out escape and four days practically without any kind of nourishment have made us incapable of managing anything. We have to get ourselves some food for the night, even if we are captured trying; we cannot continue the march without food. One thing is certain; at least they will not take me back to prison.”

After 29 harrowing days on the run behind Confederate lines, the 3 officers reached Federal troops at Strawberry Plains, in the eastern part of TN on June 11, 1864.

After a 30 day leave at home in WI, Lieutenant Colonel Johnson returned to the regiment on July 24, 1864 and commanded it until its last company mustered out. This included the latter portion of the famous Atlanta Campaign led by U.S. Major General William T. Sherman. Lieutenant Colonel Johnson commanded the 15th in the fighting before Atlanta on July 22; Jonesboro, GA on September 1; and Lovejoy Station, GA on September 4, 1864.

After a rest following the capture of Atlanta in early September 1864, the 15th was briefly assigned to Provost (police) duty in Chattanooga in early October. This was followed by several months spent guarding a railroad bridge at Whitesides, TN near Chattanooga. Some of the 15th’s soldiers felt that this was the easiest duty of their war service.

From December 1864 through to February 1865, the 15th was mustered out of the Army one company at a time at the end of their respective 3-year terms of service. Lieutenant Colonel Johnson mustered out of Federal service with the last companies on February 10, 1865, at Chattanooga. The Governor of WI then commissioned him as the Colonel (Oberst) of the 53rd WI Volunteer Infantry Regiment. The war ended before the 53rd left WI and Johnson was never mustered-into the Federal Army at the rank of Colonel.

After the war Ole Johnson returned to the vicinity of Whitesites, TN to invest in a mining venture with at least one other ex-15th officer, Andrew A. Brown. However, due to hostility from the local population, Johnson quit the venture and came back to WI and settled in Beloit.

In 1867, Ole Johnson got married and he and his wife subsequently had a single child: Wilford Chickamauga Shipness. That same year Ole recommended to WI Governor Lucius Fairchild that the heroism of Torry Larson, and Ole B. Olson be recognized with retroactive promotions to Brevet officer ranks, which they subsequently received.

In 1871 Ole Johnson was elected Immigration Commissioner of WI, serving a 3-year term. He was at one point the Republican candidate for State Treasurer. For a time he was the Mayor of Beloit. He was also a part-owner of the Beloit Plow and Wagon Works, which produced the then well-known Beloit Norwegian Plow. In the early 1880’s, Ole sold his portion of the business and became president of the Watertown Bank at Watertown in the Dakota Territory. It was at this point that he took Shipness for his family name. A few years later his health deteriorated and he returned to Beloit where he passed away at age 48. His family attributed his early death to the strenuous nature of his wartime service. Buslett’s 1895 history of the 15th WI says this about him:

“Colonel Johnson was loved by the officers and respected by the men for his courage, ability, and conscientiousness…”