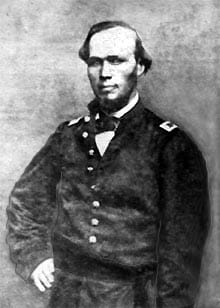 Believed taken in 1862 in Racine, Wisconsin. He is wearing a U.S. Army dark blue officer's dress uniform coat. Around his waist is a dark green sash denoting that he is in the Medical service.
Use of this photograph is courtesy of Marc and Beth Storch.
Suggest Changes to this Record

On August 4, 1862, Dr. Alfred H. Whipple was commissioned by the Governor of WI to a 3-year term of service as the 2nd Assistant Surgeon of the 15th WI. His rank was effective the same day. The Army listed his residence as being Racine, Racine County, WI.

Assistant Surgeon Whipple reported to the 15th in mid-August 1862. It was then bivouacked in Camp Erickson near the villages of Iuka and Jacinto in the northern part of MS. To see a period map of the 15th’s camp there, click Hans C. Heg, who wrote the following about it to his wife on August 18, 1862:

“We have just got another Doctor in Newell’s place. His name is Whipple — a fine looking fellow.”

At the time of his arrival, the 15th’s medical staff was commanded by Surgeon Steven O. Himoe, with 1st Assistant Surgeon Soren J. Hansen as second-in-command. Dr. Whipple filled the vacancy created by the June 10, 1862 resignation of G.F. Newell, who was third-in-command. The regiment’s non-commissioned medical staff included Hospital Steward Anton O. Øyen.

After only about a week to adjust to Army life in the field, Dr. Whipple and the 15th were abruptly ordered to depart Iuka along with other Federal forces on August 21, 1862. Over the next 5 weeks it took part in what became a grueling 400-mile retreat northward to Louisville, KY led by U.S. Major General Don Carlos Buell. The journey began well enough, as described by Colonel Heg in a letter to his wife dated August 25, 1862, written from Florence, AL:

“We passed through some of the prettiest farming country I have seen since we left Wisconsin, but the men are in the rebel army, and nothing but the wemen [sic], and Negroes are at home. Our living has been good now for a few days — plenty of peaches – chickins [sic], turkeys, and sweet potatoes.”

The food he references was probably “jay hawked” (stolen) by the 15th’s soldiers from farms along their route. At Florence, the Army ordered the 15th to store its tents and extra baggage, and then to march to Nashville, TN as quickly as possible. In his August 25th letter, Colonel Heg reflected the uncertainties the 15th was facing:

“It is said that [Confederate Major] General [Braxton] Bragg has a big force somewhere east of here — but where he is I do not know. The soldiers expect some fighting now because they have been ordered to leave most of their baggage…”

By now the retreat had began to take a toll on the 15th, as Colonel Heg acknowledged in an August 31, 1862 letter written home from Franklin, TN:

“This march has been hard on the boys. They have had to get up at 2 o’clock in the morning and march at 3 and 4, generally making about 20 miles a day. Their feet are terrible sore.”

After a few more 20-mile days, Colonel Heg wrote the following to his wife on September 2, 1862 from Murfreesboro, TN, still some 30 miles from Nashville:

“…we are completely ignorant of what is going on…always all kinds of rumors — nothing reliable…I suppose we are cut off from getting suppleis… Still you need not have any fears for our suffering… The country is full of Corn — Wheat and Beef, besides lots of Fruit — and vegitables. “

Upon reaching Nashville, Colonel Heg summed up his regiment’s experience in a September 5, 1862, letter to his wife. Unbeknownst to Heg and his men, they were only half way through their ordeal:

“Since we left camp Erickson we have marched 200 miles at forced marches — and it has put the boys right through. We have marched about 20 miles a day — but they have stood it well, and are healthier to day than when they left.”

Unfortunately, one who was not healthier was Dr. Whipple. When the 15th departed Nashville on September 8, 1862, he remained behind “because of illness.” It is not clear when, or if, Dr. Whipple was ever able to rejoin the regiment.

As the 15th continued retreating northward, its suffering increased due to a lack of drinking water resulting from drought conditions in KY. At times the dust thrown up by the passage of the Army resembled a thick fog that coated the soldiers head-to-foot. The retreat finally ended with the Union Army’s arrival at Louisville on September 26, 1862.

After only a week to rest and refit, the 15th left Louisville on October 1, 1862, with the Army of the OH and began a week-long march to the south-southeast. On October 8, 1862, at Perryville in Boyle County, KY, the fighting that the soldiers had expected to take place between the armies of Generals Buell and Bragg finally happened. The Battle of Perryville (also called the Battle of Chaplin Hills) was a very bloody fight. While this was the 15th’s first big battle, it emerged from it without suffering a single fatality.

After the fighting stopped, the 15th helped pursue the retreating Confederates on foot. By late November 1862, they had advanced all the way south to Nashville, TN again.

During this time, Dr. Whipple’s health had failed to improve. As a result he submitted a letter to the Army asking to resign his commission and return to civilian life. On November 26, 1862, the Army accepted Dr. Whipple’s resignation and released him from his remaining military commitment. His position was subsequently filled by Oscar Kremkler, who was appointed by the Governor on December 15, 1862.

It is said that Dr. Whipple died only 5 days after returning home to WI.