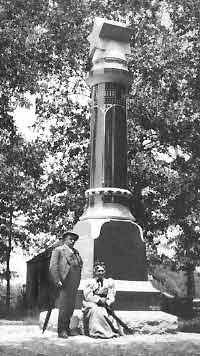 This is the fourth portion of E.B. Quiner’s history of the 15th Wisconsin, which fought in the Federal (Union) Army during the American Civil War (1861-1865). This portion covers the time period of May, 1863, through September, 1863. Information within brackets [ ] has been added to the original text by the webmaster to help modern readers understand what Mr. Quiner rightfully assumed mid-19th century readers would automatically know. Alternative spellings of 15th soldiers’ names have also been added within brackets by the webmaster, using spelling from the 15th’s official muster rolls. Finally, hot links have been added that will take you to on-line transcriptions of official documents and soldiers’ letters, and to profiles of soldiers, which contain additional information about the 15th or its soldiers. Enjoy!

Source: Quiner, E. B., The Military History of Wisconsin: Civil and Military Patriotism of the State, in the War for the Union. Chicago, Illinois: Clarke & Company, Publishers, 1866. Chapter XXIII, pages 622-625.
[Change of Command]

“On the 1st of May, the regiment was transferred to the Third Brigade, of which Colonel [Hans C.] Heg had been placed in permanent command, by General Rosecrans. Adjutant Henry Hauff was appointed Assistant Adjutant General, Captain Albert Skofstadt, Inspector, and Lieutenant O. R. [Ole Rasmussen] Dahl, Topographical Engineer.

The Fifteenth, with Heg’s brigade, accompanied the movement of General Rosecrans’ forces, against General Bragg, at Tullahoma, leaving the neighborhood of Murfreesboro on the 24th of June, Heg’s brigade being detailed as the rear guard of the Twentieth Corps, under General McCook.

We have before described this march of the army, and nothing occurred of much historical importance, in which the Fifteenth was engaged. After driving Bragg out of Tennessee, General Davis’ division went into camp at Winchester, Tenn., on the 3d of July.
[First to Cross the Tennessee River]

On the 17th of August, the onward march was commenced, and the division crossed the Cumberland Mountains, to Stevenson, Ala. [Alabama], where they remained until [August] the 28th, when they led the advance of Rosecrans’ army against the enemy, in the Chickamauga campaign. Proceeding by a circuitous route, the brigade reached the Tennessee River near Caperton’s Ferry, in the neighborhood of Bridgeport, where they constructed a pontoon bridge, and the Fifteenth Wisconsin was the first regiment to cross into the enemy’s country, south of the Tennessee River.

On the morning of the 19th of September, General Davis’ division was ordered to march at daylight, but it was 8 o’clock before they got in motion. The engagement began on the extreme left, about 10 o’clock, and the cannon firing increased as they advanced. About noon they passed General Rosecrans’ headquarters, at the widow Glenn’s house, and were soon after seat forward at a double quick, and thrown into line of battle, to fill a gap which existed in the lines at that place, and of which the rebels were attempting to take advantage, by throwing in a force, and thus cut the army in twain. Heg’s brigade was formed in two lines, the Thirty-fifth Illinois on the left, the Eighth Kansas in the centre, and the Fifteenth Wisconsin on the right. The Twenty-fifth Illinois was in the second line, as a reserve. Advancing in this manner, the enemy skirmishers were driven in, and a heavy fire was received from his main line. The brigade continued to advance, however, until the Eighth Kansas began to waver and fall back. Being unsupported on the right, and the regiment on the left thus faltering, compelled the Fifteenth also to fall back, which it did, fighting, carrying off most of its wounded. Here Captain [John M.] Johnson, of Company A, was killed. Being reinforced, they regained the lost ground. Colonel Heg was conspicuously active, and labored with the utmost bravery to make up by personal valor, what he lacked in numbers. The forces in this part of the field were, however, compelled to yield to superior numbers, and fell back across an open field. The regiment was stationed in reserve a few moments, when the front line was driven back. The regiment was lying down as the Thirty-fifth Illinois passed over them, intending to form in the rear of the Fifteenth, but did not, and passed through a column of reinforcements, which were just coming up. The reinforcements, supposing the Thirty-fifth to be the last Union regiment in their front, mistook the Fifteenth for a rebel regiment, and opened fire, while the enemy began a heavy fire on the other side. Being thus placed under the galling fire of both friend and foe, the regiment was compelled to break, and each man looked out for himself. The regiment was no more together that day as an organization, but the men attached themselves temporarily to the commands they first encountered, and stayed with them till night. Another advance was made, and the lost ground occupied until near sundown, when Lieutenant Colonel Johnson proceeded to gather his scattered regiment. About this time, Colonel Heg was wounded by a shot in the bowels, which proved fatal next day. Captain [John M.] Johnson, of Company A, and Captain [Henry] Hauff, of Company E, were killed; Major [George] Wilson and Captain Captain [Augustus] Gasman were severely wounded, Captain [Hans] Hanson, of Company C, mortally wounded, and Second Lieutenant C. S. Tanberg [Christian E. Tandberg], of Company D, was also wounded.

The remnant of the Fifteenth was aroused at 3 o’clock next morning, and put in a commanding position near the Chattanooga road, to the right and somewhat to the rear of the rest of the army. About 10 o’clock the skirmishers became engaged on the left, and the battle soon raged with great fury on that part of the field. [General] Sheridan’s and [General] Davis’ divisions were soon ordered forward to occupy the extreme right of the line. Davis’ division consisted of the Second Brigade, Colonel Carlin, and the Third, (late Heg’s) now commanded by Colonel Martin, of the Eighth Kansas. Carlin’s brigade occupied the frontline, his left joining General Wood’s right, with the Third Brigade in his rear as support. We have elsewhere related the great blunder at Chickamauga, whereby General Wood’s division was withdrawn, and the divisions of Sheridan and Davis were allowed to be outflanked and slaughtered. A recapitulation here is therefore unnecessary. After General Wood’s departure, Colonel Heg’s brigade was ordered to fill the gap, with about 600 fighting men. The Third Brigade had hardly time to get into line, before the rebels attacked them. Protected by a slight barricade of logs and rails, they were warmly received, and repulsed with great slaughter. A second charge was also bravely repulsed, soon after which, the right and left flanks were turned, Sheridan’s division not having come up on the right of Carlin and alarge gap still existed in the position vacated by General Wood. Holding out to the last, in hopes reinforcements would come, the regiment, when almost surrounded, broke, the last to leave their position, and many were captured, among them, Lieutenant Colonel [Ole C.] Johnson. [To read the personal account of the battle by Lieutenant Colonel Johnson, click HERE]

An effort was made to gather the scattered men near the Chattanooga road, but it proved a failure, and the retreat was continued a mile south of the road, where a good position was obtained, and here men were gathered from the division, and from most of the regiments of the corps, who had got separated from their commands. The whole force was consolidated, and the position held until 5 o’clock in the afternoon, when they were ordered three or four miles further to the rear, where they camped for the night. Here the fragments of the regiment were gathered. The day before, their [the 15th’s] aggregate [strength] was 176 [officers and enlisted men], it was now reduced to 75.

The killed and wounded [at Chickamauga], as officially reported, were:

Forty-eight were missing, mostly taken prisoners. [To review a list detailing the names and fate of the 15th’s casualties (killed, wounded, and Missing), click HERE]

All the field officers being disabled, Captain [Mons] Grinager took command of the regiment. [To read the 15th’s official after action report written by Captain Grinager, click HERE] Soon after breakfast, on the 21st, companies G and I, which had been stationed at Island No. 10 since June 11th, 1862, joined the regiment. They numbered eighty men – more than all the other companies put together. [To read the 3rd Brigade official after action report by Colonel Martin, click HERE.]

Rail breastworks were thrown up, but the enemy made no attack, and the brigade was ordered, at 10 P. M., to proceed to Chattanooga, where they arrived about daybreak, and commenced throwing up breastworks. Here the regiment, with the whole army, suffered severely for fuel, provisions and clothing, there being only a single line of communications over the Cumberland Mountains, to Stevenson, 180 miles, which was continually interrupted by the rebel cavalry. Captain [John] Gordon, of Company G, joined the regiment on the 28th of September, and being senior Captain, took command.” [To read the official Chickamauga report of General Davis, the 15th’s Division Commander, click HERE.]

[To read excerpts from letters, diaries, and interviews of 15th soldiers about their experiences during the May through September, 1863, time period, click HERE]